Sarah Stenuf, founder of Ananda Farms, New York’s first U-pick hemp farm in Fulton, began her journey with cannabis after serving as an Apache helicopter crew chief in the military. Sarah served four years in the armed forces before being medically discharged for combat PTSD and epilepsy from a traumatic brain injury. After returning home, she was prescribed a slew of medications that she says made her social and psychological issues worse.

“After two failed suicide attempts, thank God, one of my buddies came over with a bunch of weed and was like, ‘Listen, just try it out,’” Sarah says.

Sarah and her wife, who’s a licensed therapist, were both wary about adding yet another drug to her regimen. Desperate for a better option, Sarah tried it anyway. Soon, she noticed drastic improvements in her mood, her appetite and her anxiety. The positive results eventually led Sarah to start growing her own cannabis.

“I quickly discovered agro-therapy, the benefits of getting my hands into the dirt itself and the role that played in my mental health,” she says. “Just getting out of bed, keeping the plants alive, providing my own medicine – it gave me a really cool sense of purpose, a sense of pride. For someone like me who had suffered severe depression and anxiety for a long time, it was also really motivating.”

It took years, but Sarah eventually weaned herself off of 13 other medications and then started sharing her experience with others. Now she dedicates her time to helping veterans who have gone through similar experiences.

Sarah has also started a nonprofit, Veteran’s Ananda Inc., which uses traditional and nontraditional therapies to help veterans. When the DEA opened up hemp licensing for more growers, she applied, thinking it would be a great opportunity to generate capital for the nonprofit. Today  she offers a program that trains veterans how to farm, complete with housing and mental-health support and treatment. Ten percent of all sales from Ananda Farms helps fund the nonprofit. 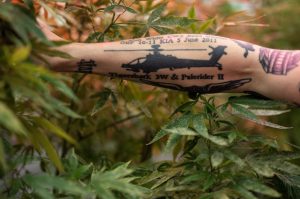 “My belief is that veterans are going to be the pioneers at the forefront of the new  cannabis industry here,” Sarah says. “We’re going to lead the game! I feel that it’s part of my responsibility as an experienced hemp farmer to make sure disabled veterans are ready and able to be successful in it.”

“For me as a farmer, to pump out the education, make the connections, and hear the stories, it’s been simply incredible,” she said. “I started selling directly to consumers, which was amazing.”

Like many local organic farm owners, Sarah is acutely aware of her impact on the environment, and incorporates regenerative practices into her education and trainings.

When the application process opens, Sarah plans to apply for an adult-use cannabis cultivation license.

“I’m confident we’re ready,” she says. “We’ve been waiting for this for years.”

Where you can find us
Weekly Grow Diary - Free Download!